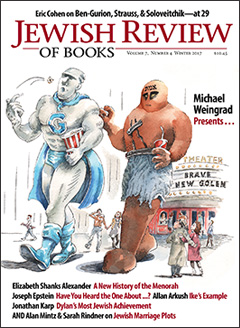 What’s Yichus Got to Do with It?

For the whole history of Jewish society, until less than two hundred years ago, love and attraction played little or no role in the making of marriages, which were arranged and contracted according to the interests—commercial, religious, and social—of the families involved.

Twilight of the Anti-Semites

Nietzsche’s reception has been sharply divided between anti-Semitic and philo-Semitic readings. Richard C. Holub's new book explores how the philosopher's views changed over time and whether some of his statements about Jews should be attributed to another hand.

A Brand Rescued from the Fire

Leon Chameides has painstakingly collected his father’s writings from the fateful years of 1930s Polish Jewry, before the break-up of his family and the collapse of Jewish life in Nazi Europe.

Our Kind of Traitor

More than 40 years after the Yom Kippur War, some of its battles rage on, including the debate over the spy Ashraf Marwan’s true loyalty.

Jokes: A Genre of Thought

Three people are required to perfect a joke: one to tell it, one to get it, and a third not to get it.

The Genius of Bernard-Henri Lévy

Bernard-Henri Lévy's amour propre, while immense, does not quite extend to regarding his life as exemplary in its Jewishness, nor to tying all of his political actions to Judaism.

Bling and Beauty: Jerusalem at the Met

In a new exhibit at the Met curators Barbara Drake Boehm and Melanie Holcomb wear their liberal hearts on their sleeves, imagining that Jerusalem's crowds might yet be resurrected as a convivial medieval pluralism.

A Foreign Song I Learned in Utah

Despite all of Bob Dylan’s subterfuges, disguises, and costume changes, he really was a child of the American heartland. Winning the Nobel Prize might actually be his most Jewish achievement.

The web series Soon by You is part Seinfeld, part Srugim.

Memory and Desecration in Salonica

Memory and a vandalized memorial in a once-Jewish city on the Aegean Sea.

On golems and global conspiracy theories.