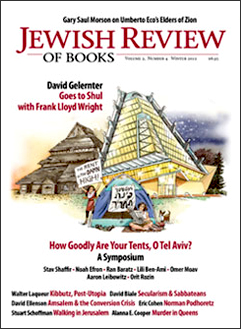 Curating Assimilation, Rav and the Butchers & the Bergson Boys.

A Tale of Two Synagogues

One hundred years ago, Yosef Bussel, Yosef Baratz, eight other young men, and two young women arrived in Umm Juni on the southern shore of Lake Tiberias. There they established a kommuna, a small agricultural settlement that was to become the first kibbutz. A new Hebrew book celebrates the centennial history of this great experiment.

There was a common idea behind ritual murder and host desecration accusations: Jews were imagined to be re-enacting the crucifixion.

Umberto Eco's new novel highlights—or exemplifies—the real history of The Protocols of the Elders of Zion, intertwined as it is with bad fiction.

Jewish Identity and Its Discontents

Two philosophies—one analytical, the other amorous—of the modern Jewish condition.

Walkers in the City

Herman Melville was unimpressed with Jerusalem in 1857, but what would he say if he were a saunterer on Mamilla or King George today?

For Chaim Gans, the justification for nationalism in general, and Zionism in particular, lies in the human rights of the individual.

A new biography charts the rise of Norman Podhoretz, from a young voice of the anti-Communist left, to a leading neoconservative and American Zionist.

A Murder in Queens

The murder conviction of Marina Borukhova in 2008 shocked the Bukharan Jewish community of Forest Hills. But many questions remain unanswered.

In a new book about religious moderation, William Egginton makes some good points, along with a few immoderate claims.

The Rock from Which They Were Cleft

In the past few years, MK Rabbi Haim Amsalem has become more of a controversial figure in his own community, not to mention the Shas party he represents, than outside of it. In two monumental works of Jewish law, he seeks to impact the future not only of that community, but of Israel's Russian immigrants.

Anita and the Wolf

A new Argentinian film sheds light on living with Down Syndrome.

How Goodly Are Your Tents, O Tel Aviv? A Symposium

Overshadowed by the more earth-shaking or at least highly publicized events elsewhere, the "Tent City Protests" that began in Tel Aviv last summer have been forgotten by many outside of Israel. Nonetheless, they were extraordinary both in size-on September 3 as many as 450,000 marched throughout Israel-and civility. We thought that it would be useful to listen to what some thoughtful and involved Israelis are saying about what they saw or did last summer in the streets of Tel Aviv and Jerusalem.

The Wages of Criticism

The great 18th-century talmudist Rabbi Aryeh Leib Ginsburg never whitewashed his disagreements with other scholars, claiming that most "ruined good paper and ink and embarassed the Torah." According to a popular rabbinic legend, his downfall came when, in an act of cutting vengance, the books he had criticized came toppling upon him. But recent accounts of the story seem to whitewash the message.