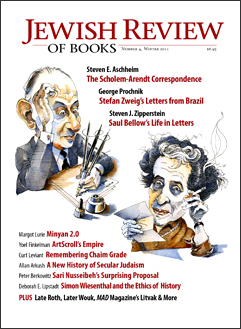 God, Torah, and Israel: An Exchange

Between New York and Jerusalem

For twenty-five years, Gershom Scholem and Hannah Arendt, two of the most gifted, influential, and opinionated Jewish intellectuals of the 20th century, maintained a remarkable correspondence. Recently published, these illuminating letters provide a rare glimpse into a relationship that has too often been described as adverserial.

Simon Wiesenthal and the Ethics of History

Was Simon Wiesenthal an intrepid hunter of mass murderers? Or was he in fact more of a charlatan than a hero? Tom Segev's new biography of the most successful—and controversial—Nazi-hunter raises more questions than it cares to answer.

How did a Brooklyn-based, Orthodox publishing house corner the market on religious texts in America?

The Novelist and the Physicist

The next big thing in prayer.

The Language of Tradition

On tradition as a first language.

The Red Beret and the Rabbis

What has happened to the Religious Zionist rabbinate?

The Future Past Perfect

Treasure and tragedy in the letters of Stefan and Lotte Zweig, one of the most famous literary couples of the early 20th century.

One of the many pleasures of the recently published Saul Bellow: Letters is how it reacquaints us with Bellow's wry, poignant, infectiously erudite voice. This is all the more surprising because he wasn't, or at least so he insisted, a natural-born letter writer. As in his literature, Bellow's language is so stunning that one wonders whether he was writing to both his correspondents, and to readers like us.