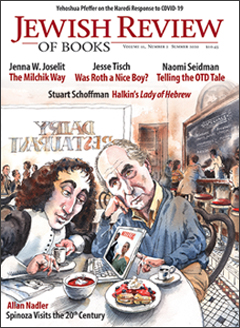 The First Amendment and the Vocabulary of Freedom

Oral arguments in a case involving two Catholic schools sometimes sounded less like a jurisprudential clash over the First Amendment than a synagogue kiddush.

Not a Nice Boy

To every author who seemed too cautious—which was nearly every author he knew—Roth gave the same advice. “You are not a nice boy,” he told the British playwright David Hare. His friend Benjamin Taylor’s memoir is . . . nice.

Katchor seems to take his cue from these menus with their meandering columns of dense text; their indirection parallels and feeds his own.

“A Story of Commitment, Solidarity, Love Even”

Retracing her father’s wartime journey from Poland, across the USSR, through Iran and eventually to Palestine, Michal Dekel learns a lot about what it means to belong to a people.

The Law of the Baby

Mara Benjamin provides a deeply philosophical account, in loving, sometimes humorous detail, of what it is like to live under the Law of the Baby—and uses it, together with incisive readings of classical Jewish texts, to explore the nature of obligation in Judaism.

The elegant essays in Hillel Halkin's new book are the fruit of a lifetime devoted to Hebrew literature.

In 2006, a blogger known as Baal Habos posted about a former rebbe who had once compared heretical media to “a hole in the head.” By then he had become a “ba’al ha-bos” (roughly, a family man), with a position in the community he wasn’t comfortable giving up, he had acquired plenty of holes in his head and wanted to discuss them—anonymously.

“We Found Our Outrage”

On March 2, 2015, a handful of campus activists announced that Andrew Pessin was an anti-Palestinian bigot. “I feel unsafe,” wrote Lamiya Khandaker, the student chair of diversity and equity at Connecticut College.

What does it mean to say that books have lives?

My Scandalous Rejection of Unorthodox

All of us in the online OTD community have gone through some version of the transformation Unorthodox dramatizes, and we gobble down and fiercely debate every new OTD memoir that hits the shelves, every documentary and movie that comes out.

A Plague on the Shores of the Sea of Galilee

The death of the Great Maggid in December 1772, a week before Hanukkah, was a crucial moment in the early history of Hasidic movement.

If God Wills It, a Broom Can Shoot

“Are you really intending to raise our kids,” my wife Tali asked me one Saturday afternoon after our Shabbes lunch, “in a world that doesn’t have Harry Potter in Yiddish?”