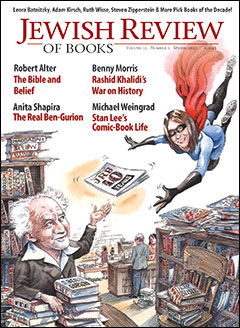 A Decade of Recommendations

In celebration of our 10th anniversary, we asked 10 of our favorite readers which books they had found themselves recommending the most over the last decade.

The War on History

"People have often asked me if something like the revisionist Israeli historiography to which I contributed in the late 1980s exists on the Palestinian side."

Marx and the Jewish Fingerprint Question

Are there hints about Marx’s thoughts on Judaism in his writing, and if so, what do they say?

The Lost Voices of Salonica

Even in comparison with so many other contributions to American popular culture and entertainment, comic books are an especially Jewish story.

Three decades ago, Allan Nadler went to Vilna to reclaim books that the Nazis had plundered from YIVO, or so he thought. Dan Rabinowitz’s Lost Library solves the mystery—and raises important questions.

Thoreau and the Jewish Problem

When my friend and I read Walden, I shuttle between my old paperback, festooned with underlining and marginalia, and Jeffrey S. Cramer’s handsome annotated edition.

Lawrence of Judea: T. E. Lawrence and the Deal of the Twentieth Century

"It is essential that [the Jewish community] should know that it is in Palestine as of right and not on sufferance." —Winston Churchill

Part of being a ba’al teshuvah is the yearning to stop being one—to finally blend with those who never had to return because they never left.

The Way We Live Now

One uncanny thing about this moment is that no one has yet put the experience we are all having—collectively yet separately, sometimes on Zoom—into articulate words.