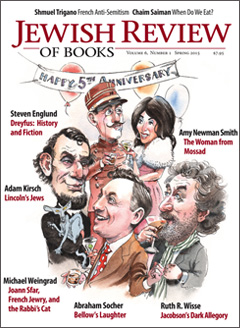 A Journey Through French Anti-Semitism

There is a problem with the inevitable reflexive warnings after every vicious attack not to slip into Islamophobia. A short personal history of how France got here.

Drawing Conclusions: Joann Sfar and the Jews of France

The great French comic artist is now working at the height of his considerable powers, and he is obsessed with questions of Jewish identity and life in Europe.

Lincoln and the Jews

Lincoln encountered a surprising number of Jews in his life. Throughout, he seems to have treated them with the benevolence and absence of prejudice one would expect from the Great Emancipator.

The Jewish peddler, the “slave of the basket or the pack; then the lackey of the horse,” did not have an easy time of it.

In 1919 Oliver Wendell Holmes changed his mind and in so doing transformed the law of free speech.

Assaf Gavron’s The Hilltop is a refreshing reminder that traditional realism is still an effective vehicle of insight into contemporary society and politics.

Sylvia Rafael: The Life and Death of a Mossad Spy opens not with an intrepid secret agent about to pull off a bold maneuver, as books with such titles usually do, but with nine men gathered around a table in 1977, studying a picture of an Israeli agent.

Academic scholars, of all people, should recognize that excoriation is not an acceptable substitute for argument, but, in fact, it pervades much of the discourse that today passes as “criticism of Israel.”

An Affair as We Don’t Know It

Harris retells the “Dreyfus Affair” from Lieutenant-Colonel Marie-Georges Picquart’s point of view, dramatically reconstructing how he zeroed in on the true culprit.

Going Under with Klinghoffer

When it came to New York’s Metropolitan Opera this past fall The Death of Klinghoffer faced angry—and, it must be admitted, some pretty shrill—demonstrators.

The JRB editors celebrate our fifth anniversary with our top-five book lists.