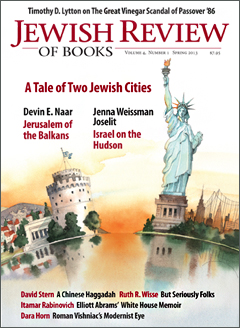 Letters from Henry Kissinger and other readers.

Jerusalem of the Balkans

In 1911, David Ben-Gurion spent several months in Salonica and declared that it was "the only Jewish labor city in the world." Now, because of an open-minded mayor and his nationalist opponents, this formerly Jewish city is experiencing a peculiar mix of Jewish memory and anti-Semitism.

Why Is This Haggadah Different?

The Haggadah of China's Kaifeng Jews is not all that dissimilar from your Maxwell House version—but it speaks volumes about the community that produced it.

Israel on the Hudson

An ambitious, new three-volume work attempts to tell the story of New York's Jews from the days of Peter Stuyvesant to the present.

Daniel Schwartz's excellent new book is the first ever to chart the changing image of Spinoza throughout the centuries.

The Gaon of Modernity

Was the Vilna Gaon a great defender of tradition or a radical modernizer?

Was Jacques Derrida a Jewish thinker?

From the Middle to the End

A deceptively simple novel about a suburban, Midwestern Jewish family catapults into something annoyingly profound.

Andy Statman started out as an unlikely prodigy: a New York Jewish kid playing bluegrass on the mandolin.

Sigmund Freud loved Jewish jokes and for many years collected material for the study that would appear in 1905 as Jokes and Their Relation to the Unconscious. An excerpt from Ruth Wisse's new book No Joke: Making Jewish Humor.