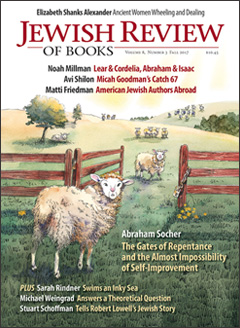 What If Everyone Is Right?

What If Everyone Is Right?

Patriotism and Its Discontents

While many Jews embraced the Russian revolutionary cause from the very beginning—four of the seven members of the first Bolshevik Politburo were Jews—the revolution did not embrace them for long.

Swimming in an Inky Sea

But on the very night in 1737 that Joseph Süss Oppenheimer’s patron suddenly passed away, he, “his servants, and many other court officials were arrested, and soon a special inquisition committee was convened in order to investigate the court Jew’s ‘atrocious crimes.’”

For some three decades Lionel and Diana Trilling shared a limelight that was not quite identical but never entirely separate.

Straying from the Fold?

Sometime in the 11th century, a distraught, young Jewish Afghan man named Yair sent a painful letter to his brother-in-law. Life had dealt Yair a tough hand, or maybe it was just his own bad choices.

“Where They Have Burned Books, They Will End Up Burning People”

The surprising source for Heine’s prophetic remark that “where they have burned books, they will end up burning people” is a play about the fate of Muslims in Christian Spain.

Upon Such Sacrifices: King Lear and the Binding of Isaac

Power and the Voice of Conscience: A Lost Radio Talk

On January 19, 1947 a young rabbi named Emil Fackenheim got behind a microphone to give a searing radio address about the Jewish refugees from Europe. He himself had been one only four years earlier.

None of these four novels by American Jewish writers is fully at home in Israel—they’re more like Mars orbiters than rovers.