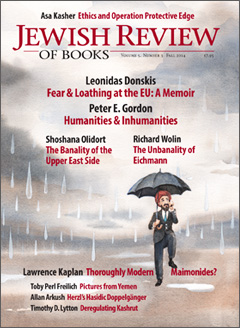 On belly dancing, big government, and the issues of synagogue and state raised by recent attempts at kashrut reform in Israel.

Neither Friend nor Enemy: Israel in the EU

After five years at the European Parliament, the author reflects on Israel's place in the discourse of the EU's chattering (and legislating) class.

Three recent books elucidate what, if anything, Maimonides has to say to us today.

The history of Jewish boxers such as Daniel Mendoza in England is as central to understanding the entry of Jews into European society as the better-known and much-researched history of Jewish salonnières and intellectuals in Berlin and Vienna.

Nathan Birnbaum, one of Zionism's early leaders, looked like Herzl and wrote like Herzl (albeit not as successfully). But his unusual trajectory has reduced the space that might have been assigned to him in the history of Zionism.

Jewish-run taverns—rowdy, often very seedy drink-holes—served to cement, rather than sour, the impossibly tense and intertwined lives of Poles and Jews, as a new book by Glenn Dynner shows.

At the height of his fame in the 1930s, Stefan Zweig was the most translated author in the world. He may also have been the most hated.

The Banality of Evil: The Demise of a Legend

To give their "Thousand Year Reich" a patina of tradition, the Nazis co-opted the German and Western European cultural canon.

Sometimes a Bag Is Just a Bag

Boris Fishman's debut novel A Replacement Life has a talented author, hefty themes, a clever and wide-ranging conceit, but somehow the whole is less than the sum of its parts.

Please remember, contestants, to phrase your answer in the form of a question.                —Alex Trebek, host of Jeopardy!™ I believe with a perfect faith in the coming of the…

Yihye Haybi, a Jewish medical assistant to an Italian doctor in Sana'a, found himself in possession of a camera. Self-taught and working under difficult circumstances, he captured the waning days of Yemen's ancient Jewish community.

Singing women spark indignation in Salonica, a change of seasons in Argentina requires rabbinic expertise, and Jews in the Ottoman army get fat and happy.

Poland Is Not Ukraine: A Response to Konstanty Gebert’s “The Ukrainian Question”

Dovid Katz explores what it means to be a “good guy” and a “bad guy” in his response to Konstanty Gebert’s article on Ukraine and its Jews.

A doctor walks into the examination room and tells his patient that the drugs aren’t working and there isn’t anything else to try . . . 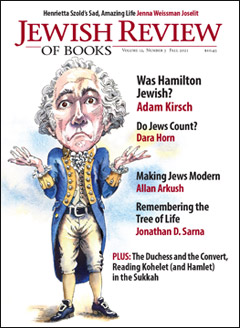