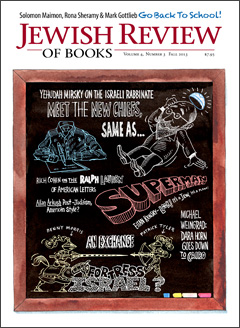 In 1935, Israel Chipkin wrote that day schools were “financially prohibitive” for most Jews. The more things change . . .

This summer, as the current Askhenazi chief rabbi was being investigated for corruption, and issues of religion and state dominated public debate, new Ashkenazi and Sephardi chief rabbis were elected. The process was messy, complicated, and ugly. The result? Sixty-eight votes apiece for the sons of two previous chief rabbis. What does a broken rabbinate mean for Israel?

Jake in the Box

The patriarch Jacob was the father of twelve tribes and (eventually) fêted by Pharaoh. But, as Yair Zakovitch shows, the Bible does not portray a happy man.

When Thomas Jefferson and Benjamin Franklin sat down to design the Great Seal of the United States they both turned to the Bible.

In the early 1930s Rabbi Kalonymus Kalmish Shapira wrote that the most important thing to teach children was that "they themselves are their own educators."

Naomi Shaefer Riley brings new data and her own personal experience to the issue of intermarriage.

Dara Horn’s novel goes down to Egypt to guide its perplexed characters through a Joseph story.

Meanwhile, on a Quiet Street in Cleveland

Two Jewish kids from Cleveland created Superman. Why does the Man of Steel still fascinate us?

Athens or Sparta? A Response

Patrick Tyler accuses Benny Morris of being unfair in his attacks on Fortress Israel.

Athens or Sparta? A Rejoinder

Accused by Patrick Tyler of unfairness, Morris presses on.

Before he became a brilliant, radical, and disreputable Enlightenment philosopher, Solomon Maimon was a miserable cheder student.

“Of course, I had myself gone to Hebrew school—that’s what we always called it though very little Hebrew was ever learned—through most of elementary school. I’d walk the five blocks down Bancroft . . .”