Founded in Jerusalem in 1996, Hadag Nahash is one of the most influential and successful hip-hop bands in Israel. The band’s name literally means fish-snake but is a spoonerism for nahag hadash (“new driver”), the wording of a sticker that cars in Israel sport, ostensibly to elicit more courtesy and patience from fellow drivers—though empirical observation suggests this is not always the result. Hadag Nahash is, in many ways, an utterly typical hip-hop band. It has self-aggrandizing lyrics (“Trumpeldor”); hymns in praise of its hometown (“Jerusalem”); critiques of political apathy and vapid commercialism (“Sod HaHatzlaha”); and boys-will-be-boys anthems (“California”). But Hadag Nahash is in fact one of the most interesting and literate pop bands in Israel, or anywhere else for that matter. In one sense this is well known. After all, its lead singer and lyricist Shaanan Streett recorded a stunning duet of a poem by the fourteenth-century philosopher-poet Immanuel of Rome with Chava Alberstein, and the band’s biggest hit may be “Shirat ha-Sticker” (The Sticker Song), a witty pastiche of bumper-sticker slogans, written by the distinguished novelist David Grossman.

But Hadag Nahash is most remarkable for its vigorous and self-aware use of the Hebrew literary canon in its songs. These songs often highlight the tension inherent in a language whose recent secularization has left its more elevated and often religiously infused strata relatively close to the surface. So, for instance, one of the band’s political songs is introduced by the words ani ma’amin (“I believe”), which traditionally introduces the religious credo “I believe with a perfect faith in the coming of the Messiah . . .” Unlike the traditional declaration of faith, Hadag Nahash’s credo does not focus on a future time (“even though he may tarry, still I believe”) or invoke a transcendent realm. Instead, it combines political reform (“I believe that companies that have lost fistfuls of public funds should not be allowed to purchase air time until they can show they’ve turned a profit”) with prophetic proclamations (“I believe . . . that if we don’t come to our senses . . . it’s doubtful we’ll be able to celebrate another sixty years”), though the band harbors no illusions about its efficacy, as the refrain angrily laments (I’m paraphrasing here): “But this won’t get anyone to move their asses.” The result is a startling juxtaposition of high and low.

Often Hadag Nahash is subtler. In the Hebrew “LeHithalek Bair” (Share the City), from Be’ezrat Ha-Jam (another pun: “With the Help of the Jam” rather than Hashem, that is, God), the band offers a utopian vision of Jews and Arabs sharing Jerusalem. The song lovingly catalogs life in Israel’s capital, exhorting its listeners to share in its bounty: “let’s share the unique smell of the warm air, books, drawings, and artists searching for an ancient flavor” along with “the August heatwaves, the parking problems, the public housing, and the graveyards.” Streett, who sings the song, then asks that we share “the nine portions (kabin) and the neighborhood fees.” The archaic phrase “nine kabin” is taken from a famous saying in the Babylonian Talmud, “Ten portions (kabin) of beauty descended onto the world; Jerusalem took nine, and one was allotted to the rest of the world” (Kiddushin, 49b). A little later, Streett again juxtaposes two realms with a stunning image of the transcendent infusing the immanent world: “Let’s share our yearly day of snowfall, the earthly manifestation of the wings of the Shekhina.” Here, the traditional imagery of the (feminine) presence of God spreading her protective wings over Israel is reimagined as the snow that occasionally graces the city.

At other times, the elevated register inserted into a song is more ironic. In “Shir Nehama” from their latest album, 6, the refrain employs two ancient verbs to lament sovevuni bi-shkalim haleituni bi-kzavim (“surround me with shekels, feed me lies”). The verb sovevuni “surround me” harks back to the poetic sevavuni in the Bible, which generally appears in negative contexts: “ropes of Sheol encircled me; snares of Death confronted me” (Psalm 18:6); “they encircle me with words of hate; they attack me without cause” (Psalm 109:3). The phrase, then, suggests that the author has been beset by shekels. But the modern verb differs from the biblical form in having a causative force that appears in the Hebrew slang le-sovev mishehu, “to ‘spin’ someone.” This modern, Israeli sense yields a different but complementary reading: “they confused me with their shekels.”

The second ancient verb in the lyric is haleituni, “feed me.” The root is a hapax legomenon: It appears only once in the Bible, in the tale of Esau selling his birthright to Jacob. Esau, the man of the field, returns famished from the (apparently unsuccessful) hunt, and demands some of the stew that Jacob has prepared: “Feed me some of that red stuff to gulp down” (Genesis 25:30) he says. Though hapax legomena are hard to define, it is clear that Esau is making a bad deal with his brother. By using precisely this word to assert that they have been “fed lies,” Hadag Nahash uses biblical Hebrew to suggest that they have been cheated by someone they should have been able to trust.

Hadag Nahash also enthusiastically and often humorously takes on the nascent Israeli canon. In “Gabby ve-Debby,” Hadag Nahash meets two figures from a 1970s show (produced by the educational television authority) that taught Israeli schoolchildren intermediate English. In the series, Gabby and Debby were transported to different parts of the world using a magic stick and a map, and in the same spirit, they offer to take the song’s narrator (Streett) anywhere in the world. After declining his first request (a Parisian bordello), the three take a wild, revisionist trip to Basel, where they meet Theodor Herzl, who is leaning on his hotel balcony, an iconic image from the First Zionist Congress of 1897. But rather than show deference to the father of Zionism, Streett bombards Herzl with a litany of complaints:

Alas, Herzl has no answer to the social and political ills that plague his ideological offspring. Instead, he places a tab of ecstasy on the singer’s tongue and says: “If you take it (im tikchu), it is no legend,” a parody of what is likely the most famous Zionist slogan, “If you will it (im tirtzu), it is no legend.” The trip eventually ends with Streett asking to go “anywhere but” twenty-first-century Jerusalem, which is exactly where he ends up.

Though it is tempting to characterize this as an anti-Zionist song, it would be wrong to do so. The narrator wants to reform Israel, not break with it. After all, Streett returns home and the song ends with him there. As the infectious refrain declares over and over, Hadag nahash osim hip hop tzioni (“Hadag Nahash create Zionist hip hop”). Though this is, in part, a riposte to the right-wing Israeli rapper Subliminal, I tend to take the members of Hadag Nahash at their word, and understand them to be promoting a form of Zionism that recognizes the current shortcomings of Israeli society and is not afraid to criticize political leaders who pretend otherwise; one that admits the “grim Israeli reality” and the pull of life elsewhere, but returns home nonetheless.

Sometimes Hadag Nahash engages the tradition without irony or learned allusions. Its cover of “Shabehi Yerushalaim” on the last track of Be’ezrat Ha-Jam is a beautiful example of this. The lyrics consist of verses twelve and thirteen from Psalm 147: “O Jerusalem, glorify the Lord; praise your God, O Zion! For He made the bars of your gates strong and blessed your children within you.” The melody was composed by Avihu Medina in the mid-’70s, but sat for a decade among his unfinished projects. It was rediscovered in 1985, and began to be played at weddings and other celebrations, until finally it became a huge hit, particularly in Orthodox and National Religious Party circles.

Hadag Nahash’s cover of the song is straightforward—neither the melody nor the lyrics are altered, and precisely therein lies the cultural brilliance of the song. It marks the band as unapologetically yerushalmit, Jerusalemite, a bold statement given Tel Aviv’s unquestioned pop-cultural hegemony. Of the nine kabin of beauty that descended on Jerusalem, Hadag Nahash, improbably, took at least one. 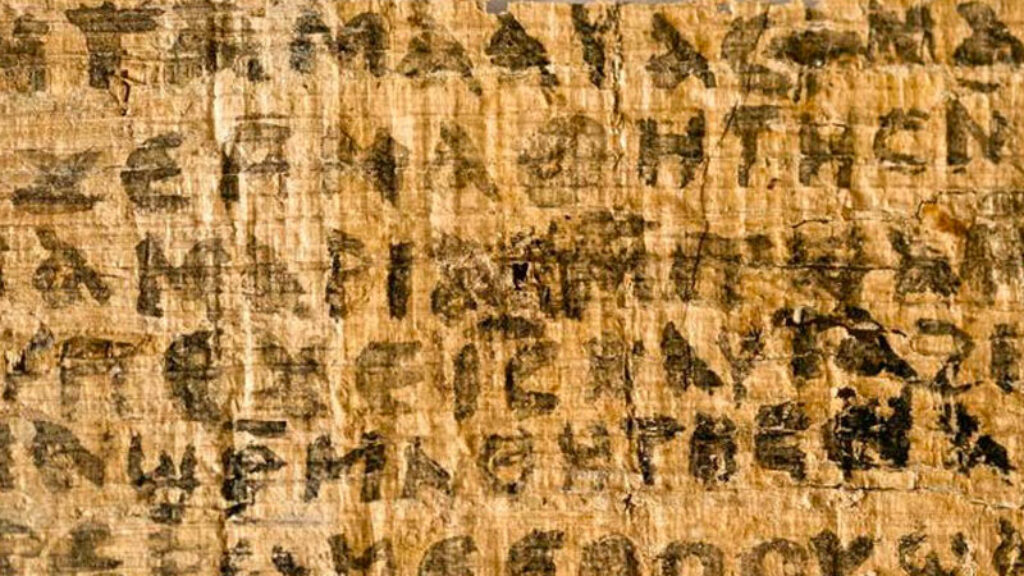 The Professor and the Con Man

The saga of the papyrus that became famous as the Gospel of Jesus’s Wife began with an email sent to Karen King, a distinguished Harvard professor, in July 2010. The subject line read, simply, “Coptic gnostic gospels in my collection.”