Last Friday, March 8, was the 30th   anniversary of Women of the Wall, a multi-denominational Jewish feminist group that has made it its mission “to attain social and legal recognition” of the right of Jewish women “to pray collectively and read aloud from the Torah at the Western Wall while wearing prayer shawls.” When Jewish women from Israel and abroad arrived at the Wall to celebrate the anniversary, they and their male supporters found themselves confronted by large numbers of haredi Jews, including young women who had been bussed in from religious high schools. Ugly clashes ensued, followed by charges and countercharges of provocation, and, of course, widespread news coverage.

This is not the way things were supposed to be.  When the Israeli government decided three years ago, in January 2016, to establish a new egalitarian prayer plaza at the Wall, liberal Jews rejoiced, and the Women of the Wall decided to accept this new compromise. But a year and half later, in June 2017, under heavy pressure from haredi parties, the Israeli government decided to postpone—and, in effect, abandon—the implementation of what Prime Minister Netanyahu had originally called a “fair and creative solution.” The immediate reactions of major Jewish communities and organizations in the United States to the government’s retreat from its initial decision were dramatic enough to threaten a rift between Israel and U.S. Jewry.

Eventually, the political furor over the failed compromise abated, as will the one over last week’s clash. But what comes next?  Will yet new compromise proposals be floated, perhaps even adopted, and then shot down?  In the volatile world of Israeli politics, it is hard to say. It is easy, however, to imagine the problem persisting indefinitely, poisoning deliberations in the Knesset and Israel-diaspora relations for decades to come.

The present arrangements at the Wall are the result of two laws, passed in 1967 and 1981 respectively. These laws classified the Western Wall as a sacred site administered by a state agency, the Western Wall Heritage Foundation, under the authority of a state employee, known as “the Rabbi of the Wall,” an office currently held by haredi Rabbi Shmuel Rabinowitz. The plaza in front of the Western Wall has been divided into two uneven sections: the larger area has been set aside for men’s prayer and the smaller one for women’s prayer. While persons of different faiths, or of no faith, can visit the Wall and even pray after their own fashion, the 1981 law bans religious practices that create “offenses to the feelings of the praying congregation” in order to maintain the “custom of the place” (minhag hamakom); both contested concepts with major implications for religious liberty and gender equality.

This conflict has led to the formation of several governmental committees and three Israeli Supreme Court decisions (delivered in 1994, 2000, and 2003). But the legal situation did not change until 2013. In a groundbreaking decision of the Jerusalem District Court, Judge Moshe Sobel upheld the rights of the Women of the Wall to pray at the plaza in accordance with their custom. He argued that their manner of prayer neither opposed the “custom of the place,” according to a broader interpretation of the term, nor offended the praying congregation. Liberal, Reform, and Conservative Jews—and of course Jewish feminist groups—greeted Sobel’s ruling with enthusiasm, but haredi political parties vehemently opposed the decision. Rabbi Rabinowitz has used various semitechnical regulations in order to circumvent full implementation of Judge Sobel’s ruling.

In response to pressure from both sides, Prime Minister Netanyahu’s cabinet approved a compromise plan in January of 2016: a third plaza, south of the current Wall plaza would be established at the foot of Robinson’s Arch as an egalitarian prayer space, without the permanent separation of men and women. The Rabbi of the Wall and the Western Wall Heritage Foundation would have no authority over this new plaza, which would be under the management of a new council that would include women and representatives of Reform and Conservative Judaism. At this new plaza, women who would prefer to pray separately could still use a temporary partition. Meanwhile, the central plaza would revert to the arrangements that had prevailed prior to Judge Sobel’s decision. This is the ambitious plan that was effectively canceled in June 2017. And so we have returned to shoving, spitting, angry words, and worse in Judaism’s holiest place.

What is the best way to govern such a contested sacred site? Our answer is: (almost) not at all. The government should adopt an approach of noninterference, restricting itself to providing law and order.  It should abolish the position of the Rabbi of the Wall, cancel bans on religious activities on account of their supposedly  offensive nature, dismantle the Western Wall Heritage Foundation, and remove the permanent mechitza (temporary, portable dividers would remain permissible). Simply put, all matters of religious decision making at the site would lie with the individual rather than with the state.

While no solution is perfect, such an approach to the Wall has many merits: It does not restrict the religious liberties of any one group; it unburdens the Israeli government from a contentious entanglement with religion that threatens its relationship with American Jewry, and, most importantly, it distances the state from the sacred, protecting religion from the corruption of state authority and power.

Early 20th-century photos of Jews praying at the Western Wall often show men and women standing side by side, each communing with God individually. It is probably too nostalgic to hope that we can return to such comity. In the meantime, we see no better alternative than ungoverning the sacred.

The Genius of Bernard-Henri Lévy

Bernard-Henri Lévy's amour propre, while immense, does not quite extend to regarding his life as exemplary in its Jewishness, nor to tying all of his political actions to Judaism. 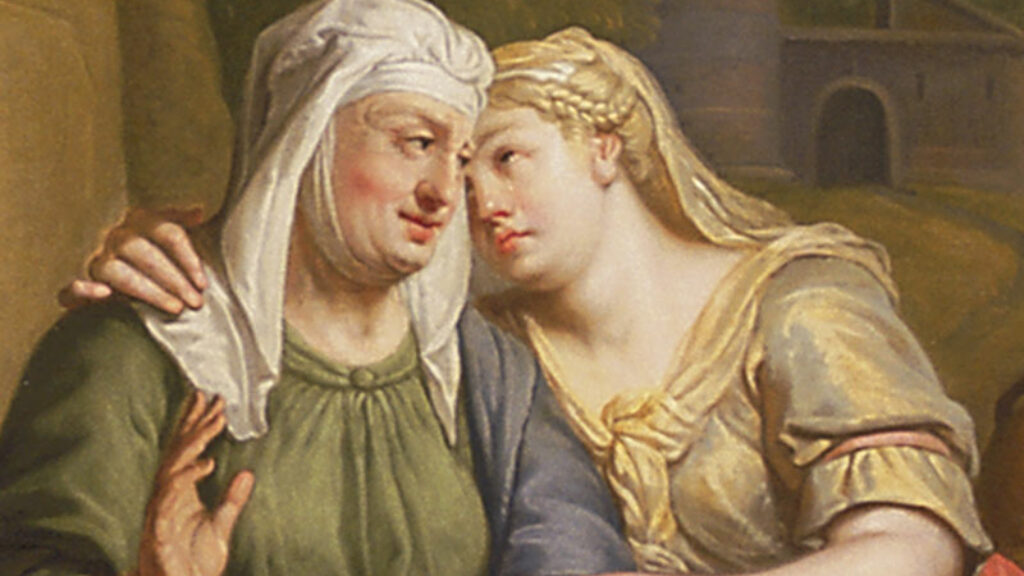 Friendship in the Fields of Moab

Naomi and Ruth have mourned together and are now setting off on the 50-mile journey from the plains of Moab to Bethlehem, toward an uncertain future—alone but side by side.

For the 6,000 Jews left in Venezuela, life is precarious. "...All three of us have been kidnapped," a chillingly relaxed young man at Hebraica Jewish Community Center tells me.