All of the photographs in this volume were taken by Solomon Iudovin, an artist who shared at least one teacher with Marc Chagall. In black and white, they depict traditional Jews like those who fill Iudovin’s famous contemporary’s colorful dreams. Iudovin took these photographs at the request of a man who, like Chagall, grew up in Vitebsk: his cousin, Shloyme-Zanvl Rappoport, the journalist and revolutionary known under the pen name S. An-sky, best remembered today as the author of The Dybbuk.

A self-taught ethnographer, An-sky was inspired by the teams of Russian researchers who brought cameras and phonographs to places far from the Russian Empire’s capitals to document the lives of subsistence farmers and reindeer hunters, to write down their stories, inquire into their familial relationships, and purchase objects for museums. Two years before the outbreak of World War I, he succeeded in convincing some wealthy Russian Jews—including the distinguished banker Vladimir Gintsburg—to finance an ethnographic expedition that would treat the Jews of Western Ukraine as people just as worthy of study as Slavic peasants or Siberian Yakuts. To join him in this expedition he recruited his cousin Iudovin, as well as the composer Yuly Engel and later the ethnomusicologist Zinovy Kiselhof, to record folk songs on wax cylinders.

An-sky’s true goal was to help modern urban Russian Jewry create a new secular Jewish culture based on their memory of the structures that governed the lives of shtetl Jews. He therefore sought to collect evidence of Jewish folk culture, to capture it in image, recording, text, and object. Convinced that shtetl craftsmen could inspire their urban brethren to become creators themselves, An-sky directed Iudovin to photograph blacksmiths, cigarette makers, shoemakers and others. There is a particularly striking picture of a slightly built weaver who stands inside the box of his loom, bare feet on a wooden pedal attached by ropes to the center of a mechanism that is taller than he is. 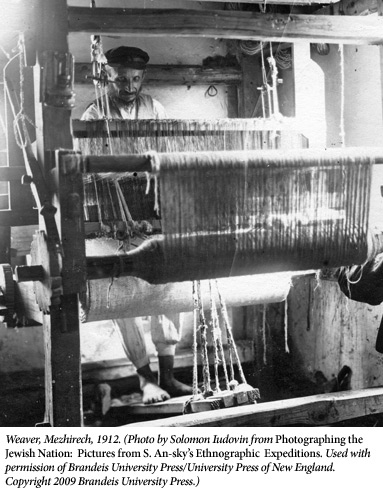 An-sky was certain that, through publication, museum exhibits and public lectures (he drew crowds of thousands), he could bring about a Jewish renaissance. He wanted to combat what he saw as a plague of assimilation and conversion to Christianity, to lure big-city Jews back to their people with art that they could not resist.

The idea was quixotic, as An-sky’s friends were quick to tell him when he gathered them in St. Petersburg to help plan the expedition. But when they insisted that no folktales or songs could compete with the material benefits of assimilation and conversion, he was undaunted. He was sure that intellectuals could pick and choose their favorite parts of traditional culture, present them attractively, and thereby produce something vital and enduring.

An-sky knew that what shtetl and big-city Jews had in common was a past in which cultural options were fewer. In 1905, he wrote to his childhood friend, the diaspora nationalist Chaim Zhitlowsky, “Until recently the Talmud and messianism have bound Jews together around a single national idea, which prevented disintegration. However, one can’t substitute one steel corset for another, that is to say, Palestinian messianism or territorialism.” Later he would grow more enthusiastic about Zionism, but he retained his suspicion of “steel corsets.” Still, he was certain that even after the rigid structures of tradition disappeared, Jews would find meaning in the traces these shapes had left in their memory.

This conviction made sense for the people in his circles, Russia’s Populist (“narodnik”) intelligentsia. The Populists were glad that Alexander II had emancipated the serfs in 1861, but they believed that Russia’s peasants had developed a unique and valuable culture under slavery, and they wanted to help the peasants preserve some of the old, even as they modernized. As a revolutionary, An-sky hoped that the Jews, like the peasants, would find that the memory of the old forms would make their modernity more socialist, less capitalist. To trigger this kind of creativity, he filled his museum with objects to remind people of the past—silver Torah crowns, centuries-old Hebrew letters, women’s holiday dresses—and photographs of these things and the people who used them, the weaver, the blacksmith, the shtetl’s children.

Photographing the Jewish Nation: Pictures from S. An-sky’s Ethnographic Expeditions is a beautifully produced and lovingly edited collection of a cache of Iudovin’s expedition photographs that was discovered in an apartment in St. Petersburg only in 2001, and that subsequently formed the basis of a series of successful exhibits in that city. In six essays, the editors—some of whom also curated the exhibits—locate An-sky, Iudovin, and their colleagues in their cultural contexts.

Iudovin’s work differs from that of other photographers of Eastern European Jews, such as Alter Kacyzne, a writer and photographer born two decades after An-sky, who became his protégé and friend. In the 1920s, Kacyzne took photographs in Poland for the Yiddish Forverts, published in New York; many appear in an elegant 1999 volume, Poyln: Jewish Life in the Old Country, edited by Marek Web. Where Iudovin photographed laborers and avoided traders, Kacyzne took pictures of busy marketplaces and pleading vendors. Where Iudovin’s Jewish boys play in a circle, Kacyzne’s glance up from heavy volumes. Kacyzne’s Jews are photographed, often, from close up: they look at the camera longingly, as if saying to their New York relatives, “Remember me? When will you send money again?” His weaver glances up, worried, from a loom that is only partially shown. Where Kacyzne’s Jewish images, produced for an overseas market, show a world that, having been abandoned, is fully available for nostalgia, Iudovin’s Jews are absorbed in their own world, which still has something to offer its viewer.

Despite their distant origins, An-sky’s project and Iudovin’s photographs speak to current Jewish concerns. In San Francisco—like the tsarist St. Petersburg, a city on the water, named after a saint, home to a sizable, wealthy, assimilated Jewish population that enjoys the benefits of living at the very edge of an empire—the new Contemporary Jewish Museum was built in 2008. Its exhibits stress the interactions between Jewish and non-Jewish cultures and are housed in a postmodern building by Daniel Libeskind. In a nervous review, The New York Times complained that this museum, with its lack of interest in the rigid structures of text and law, was all periphery, no center. “How can multiple perspectives and open-mindedness and diverse backgrounds be celebrated without a grounding in knowledge, without history, detail, object and belief? Can a museum serve its community without leading it into the unknown past as well as into speculative realms? Can the Jewish thrive without Judaism?” 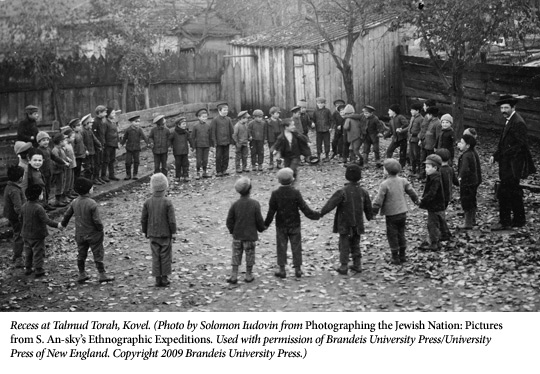 Of course, An-sky, like Libeskind, did not fully reject the Jewish past or the textual tradition. He collected rabbinic books and community records, but he displayed them in the same space as objects that no pious Jew would touch: a Jewish skull from the 17th-century Chmielnitsky uprising, a finger cut off by a boy’s family to save him from recruitment into the army. Iudovin’s Jewish children are rarely studying: they look up from their school desks, play circle games at recess, and sneak gleefully into photographs of adults. One barefoot boy of ten or twelve, cigarette between his lips, sits on the ground and looks straight at the camera; give him a kopeck, and he’ll run an errand for you right now. 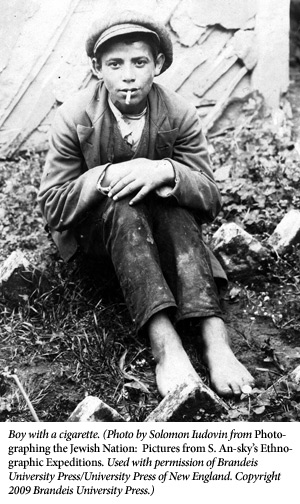 An-sky believed that these photographs would stimulate a vital, enduring response, and indeed, they already have, although from the last quarters that he would have imagined. The photo that has created the greatest contemporary stir is of a previously unknown handwritten letter from Rabbi Nachman of Bratslav, the great grandson of the founder of Hasidism, the Ba’al Shem Tov, and a charismatic Hasidic master whose followers never replaced him after he died of tuberculosis in Uman at the age of 38. This letter—apparently the first Rabbi Nachman wrote from Uman—is addressed to his daughter, “the modest and pious wise woman of valor, Adil.” Since the photograph was published, the letter  has been meticulously transcribed, annotated, and published in Shibolim, the journal of the Bratslav community in Israel.

The incident reveals both An-sky’s prescience and his blindness. He was certain that the shifts in the shtetl did not have to mean the death of Jewish culture, but he would never have believed that the 21st-century would include Hasidic journals. Nonetheless, with his hope that careful documentation of the Russian empire’s traditional Jews would be of value to a thriving new Jewishness, An-sky has something to offer Jews today in St. Petersburg, San Francisco, and even Jerusalem. 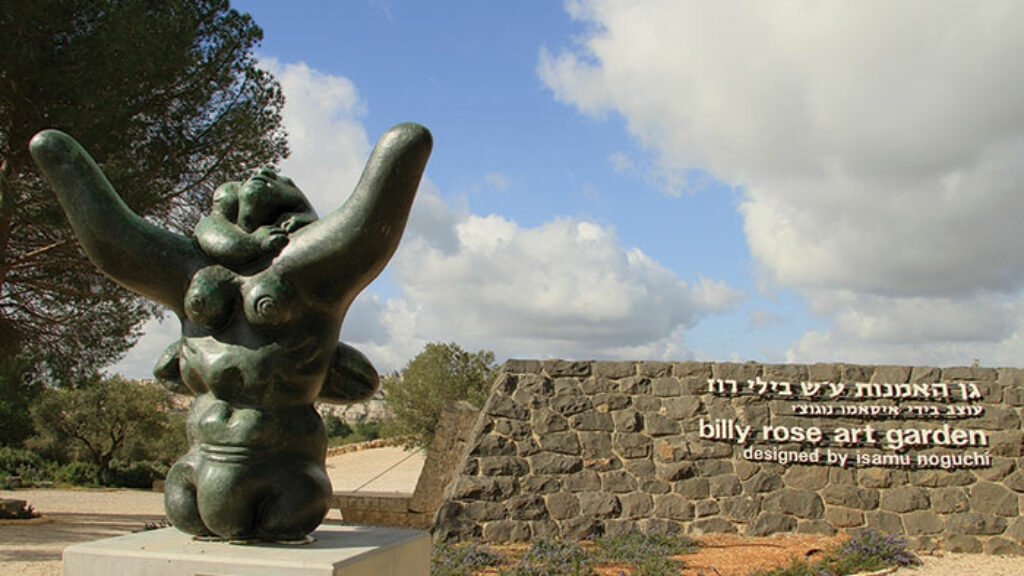 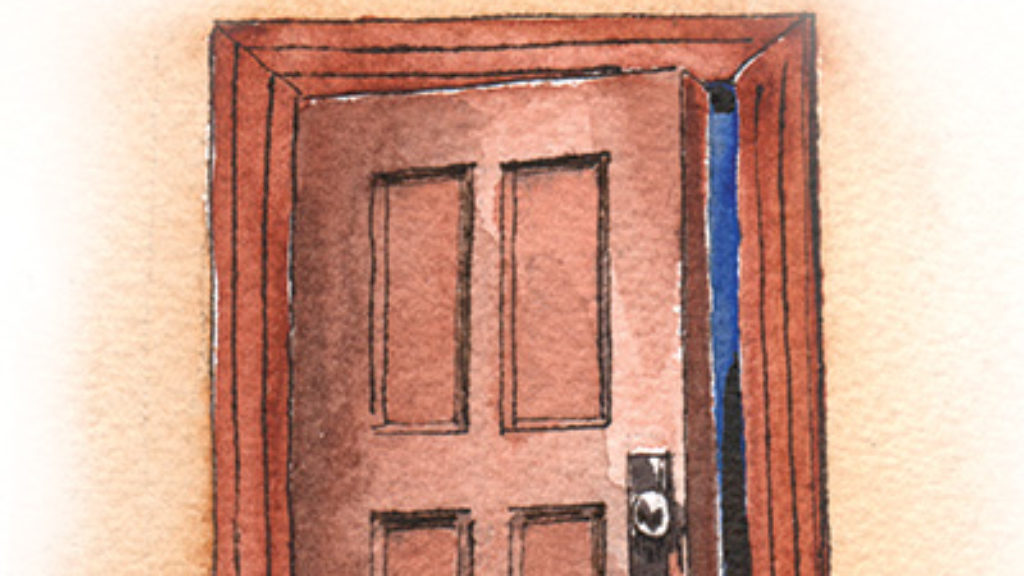 Virtually nothing of Babylonian Jewry of the talmudic period, from the 3rd to the 6th century C.E., has survived beyond the Babylonian Talmud itself to help contextualize or confirm the many things the text tells its readers.