The Pater: My Father, My Judaism, My Childlessness

“Why were the matriarchs barren?” the authors of Midrash Tanchuma ponder, “Because the Holy One desires their prayers and desires their words.” In the rabbinic imagination, God wanted to know a matriarch’s capacity to surrender to a destiny beyond her control. Theologically, not to speak of physically and emotionally, this seems harsh, unfair.

Beyond the biblical page, infertility has continued to torture the Jewish imagination. In the medieval and early modern tekhines of women who ache with a sense of personal inadequacy we find supplications such as the following prayer (in Aliza Levine’s translation):

You formed me from dust and suffused me with a holy soul, giving me life in this world—all through Your great kindness and mercy. But to my great sorrow and grief, I have but little good in this world, for You have granted me no progeny. Woe to me! My life is bitter! I am a withered tree that bears no fruit.

Without children, this aggrieved woman sees little purpose in her life—she is a tree that bears no fruit.

In Reconceiving Infertility: Biblical Perspectives on Procreation and Childlessness, academic Bible scholars Candida R. Moss and Joel S. Baden are determined, as their clever title suggests, to “give new voice to ancient ideas about infertility, ideas that challenge . . . conventional views,” including those so painfully expressed by the tekhine writer:

[W]e have written this book in the hope that it might be of use to those who suffer from infertility themselves, and seek ways to understand their experience within the context of a biblical and religious framework.

This is a difficult task, since as Moss and Baden note, childlessness in the Bible tends to be a temporary state. In the stories on which they focus, biblical infertility is created by God and (eventually) fixed by God, even if it takes decades; it is either a test of faith or a curse. The authors subtly but effectively show us how the Bible depicts the pain of being unable to conceive:

Rachel, in naming Joseph, makes clear what infertility feels like: “God has taken away my disgrace” (Gen 30:23), she says, using a Hebrew word herpa, that is used elsewhere in the Bible to denote uncircumcised men (Gen 34:14), men with their eyes gouged out (1 Sam 11:2), cowardice (1 Sam 17:26), a rape victim (2 Sam 13:13), and the collapsed walls of Jerusalem (Neh 2:17). The experience of infertility in ancient Israel was utterly crushing.

Yet, Moss and Baden ask, did all the biblical matriarchs truly want children? Rachel howls at Jacob “Give me children, or I shall die!” (Gen. 30:1); Hannah cries silently to God, but, as Moss and Baden point out, “Sarah, Rebekah, and Samson’s mother never express such a desire in any explicit fashion.” One can be barren, contend the authors, only if one’s childlessness is not desired.

[D]espite the claims of Proverbs, which attributes to the womb of the barren woman a metaphorical insatiable hunger (Prov 30:15–16), the desire for children, common though it may be, is not a universal biological imperative. It is not enough to simply say that these Israelite women wanted children. It is not enough to say that the Bible valorizes procreation. The attitudes of ancient Israelite women and the literature produced by ancient Israelite men emerged from a common cultural matrix, and it is that which much be interrogated.

The biblical protagonists themselves offer no such interrogation, with one exception that the authors, somewhat surprisingly, do not really address. Isaac prays for his wife to conceive and his prayer is granted. The result is that Rebekah struggles not with infertility but with motherhood; she challenges God about her pregnancy: “The babies fought within her, and she said, ‘Why is this happening to me?’ so she went to inquire of the Lord.” (Gen. 25:22) A less elegant but perhaps more accurate translation would be “Why am I?” Avivah Gottlieb Zornberg makes the striking observation that Rebekah’s pregnancy is, in a sense, really the “only biblical pregnancy.” Most biblical birth narratives use the formula “va-tahar va-taled”—and she conceived and she gave birth—as if there were not 40 hard weeks in between.

In pursuing their interrogation of the Israelite cultural matrix, Moss and Baden assume that because there are other biblical women about whose domestic details we know nothing—such as Miriam or Deborah—having children may not have been a desideratum for every biblical woman. But this is a bit far-fetched. As we move from the intricate family politics of Genesis to the larger nation-building stories in Exodus and beyond, personal details are simply no longer the narrative focus. Indeed, while infertility is a constant problem in Genesis, stymying women who cannot fulfill its mandate to be “fruitful and multiply,” the book of Exodus begins with the suggestion that fertility can also be a problem, at least from the Egyptian perspective. The two added verbs suggest growth of reptilian-like excess:

And the Children of Israel were fruitful and swarmed and multiplied and became strong so that the land was filled with them. (Ex. 1:7)

Moss and Baden do demonstrate how perspectives of childlessness seem to change in the New Testament (and perhaps even earlier in Deutero-Isaiah). Celebrating the barren woman, virgin birth, and celibacy may have shifted the way infertility was viewed, lessening the stigma and even elevating barrenness to a form of holiness. In some early Christian groups refusing to have children became “an expression of heightened religiosity and embodying the resurrection,” since they believed that resurrected bodies would be sexless.

In Elliot Jager’s haunting book, The Pater, he confronts his own “childlessness and its spiritual consequences” with a frank pain that equals that of the anonymous tekhine writer who saw herself as “a withered tree that bears no fruit.” A private person by nature, Jager had to

overcome his own inhibitions for the sake of “cathartic dialogue with other childless men.” He shares a great deal with his readers but not in the irritating, overly confessional style of many contemporary memoirists.

Jager and his wife Lisa tried to have a child, and he describes the pain caused by the seemingly innocent encounters of everyday life which remind them of their inability to do so:

I can’t help but think what-might-have-been thoughts as I observe children around us throwing age-appropriate tantrums, taking on likeable personas, cracking jokes, and gradually reaching bar or bat mitzva age. On such occasions, even as I take joy in the happiness of my friends and relatives, I would be dishonest to deny a sense of melancholy that Lisa and I can only be spectators to such milestones.

The “pater” of Jager’s title is his own father, who abandoned him and his mother when he was a child. In the awkward but poignant attempt Jager made at reconciliation 30 years later, his father, an Orthodox Jew, presses Jager about his infertility: “My father’s compulsive preoccupation with my childlessness,” he writes, “is all the more ironic because when I was a child he abandoned me—twice.” Jager’s desperation to be a father is driven in part to be the father he never had.

Jager is moved by his country’s commitment to in vitro fertilization (IVF). At a Knesset hearing in the early 2000s, Israel’s finance ministry wanted to eliminate IVF from the list of procedures covered by the national health system. The opposition cut across the entire spectrum of Israel’s parliament, from Palestinian nationalists to Zionist hawks. Israelis believe, according to Jager, that they have an “intrinsic ‘right’ to parenthood, viewing infertility as a treatable ailment and IVF not only as a cure, but as a citizen’s entitlement.” So Jager and his wife Lisa were in the right country, but after five or six rounds of IVF—a difficult and “grueling” protocol—they decided to call it quits. The family they had imagined did not materialize. They considered adoption and surrogacy, but neither option felt right for them. They went to therapy and worked through much of their pain, but, as Jager makes clear, this is not something one simply gets over:

After our failed IVF experience, I made a (for me) monumental decision—though at the time I didn’t admit a connection because, really, it was the culmination of a number of factors. I took off my kipa.

The Jewish promise of a happy, nuclear family to carry his line forward in a country that actively promotes rising birth rates was not to be his lot, and though he remains a religious Jew (and even reached a kind of reconciliation with his aging pater), he is, to some extent, estranged. His childlessness hits him hardest in synagogue, when he attends a brit mila, or a bar or bat mitzvah. Purim, with all its frolicking children, is hard. So are weddings. “May you merit building a home of faith in Israel”—recited under the wedding canopy—reminds him that the home intended in this blessing is one with children, a home he and his wife will not have.

Jager takes solace in famous and influential Jewish men who were childless but left a different type of legacy, from the British Prime Minister Benjamin Disraeli to Talmud professor Saul Lieberman. If Jager wonders about his own legacy, let it be, in part, this: He has given a tender voice of understanding to the male experience of infertility that is so often ignored or tucked away in the corner of an OB/GYN’s office. As one man he meets says, “…it feels like a failure. I believe in propagation of the tribe. I just haven’t managed to do it.” 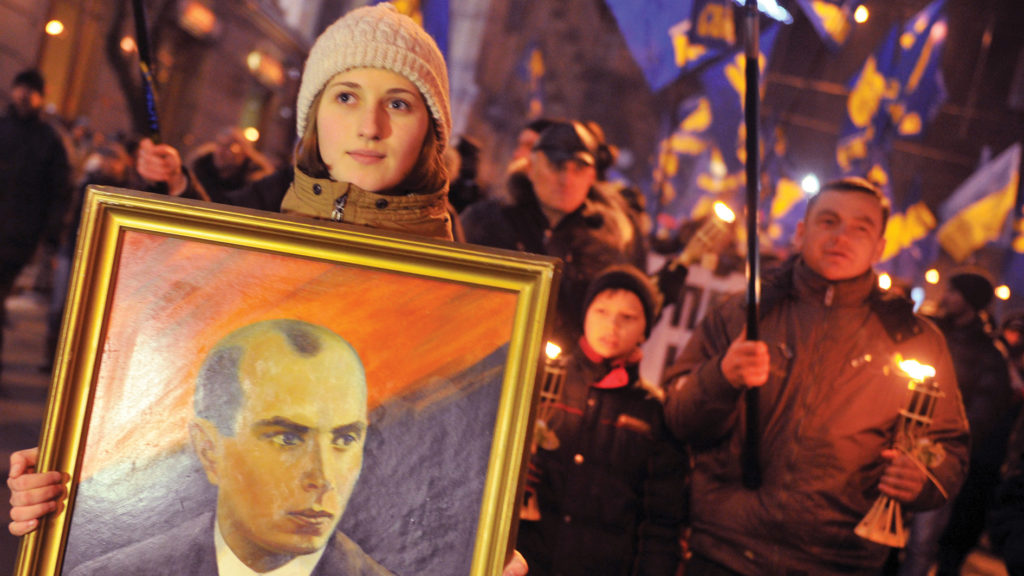 Poland Is Not Ukraine: A Response to Konstanty Gebert’s “The Ukrainian Question”

Dovid Katz explores what it means to be a “good guy” and a “bad guy” in his response to Konstanty Gebert’s article on Ukraine and its Jews.

Bologna, 1857: A six-year old is taken from his Jewish family to be raised a Catholic. Why are we still talking about this case? An archbishop responds.

Trilling, Babel, and the Rabbis

Part of Trilling's mystique came from the way he seemed "to be a Jew and yet not Jewish."