Inheriting Abraham: The Legacy of the Patriarch in Judaism, Christianity, and Islam
by Jon D. Levenson
Princeton University Press, 288 pp., $29.95

Early on in Harvard biblicist Jon D. Levenson’s engaging new book, he reminds us that it is a bit of a surprise that the biblical Abraham came to be regarded as the founder of Judaism. “It is not simply that in Genesis, Abraham does not teach what Moses is said to have taught,” he writes, “it is that he does not teach anything at all.” Of course, this was eventually a problem not only for Jewish tradition but for Christianity and Islam as well, who also regarded themselves as heirs of the patriarch. And so each tradition produced its own evolving “usable Abraham,” complete with a full biography and theology (Abraham the idol smasher, monotheistic missionary, would-be martyr, and so on), often building upon and responding to one another, in midrashic literature, the New Testament, the Qur’an, and elsewhere.

Levenson wisely does not ask which Abraham is the real one, nor does he attempt to uncover kernels of historical truth beneath the biblical narrative and later traditions (an impossible task anyway). Rather, he compares the biblical Abraham to the portraits painted in subsequent centuries in rabbinic Judaism, Christianity, and Islam, and asks a probing set of questions that lay bare the internal dynamics of each tradition as well as the tensions between them.

Levenson’s literary skill and encyclopedic grasp of the exegetical traditions of Judaism, Christianity, and (to a somewhat lesser extent) Islam makes this volume a valuable exercise in comparison. But the book also makes a strong and controversial argument about what that comparison actually reveals about the role of Abraham in the relationship between the three “Abrahamic” religions. As he writes in his introduction:

The claim that Abraham is a source of reconciliation among the three traditions increasingly called “Abrahamic” is as simplistic as it is now widespread. Historically, Abraham has functioned much more as a point of differentiation among the three religious communities than as a node of commonality. The assumption that we can recover a neutral Abraham that is independent of Judaism, Christianity, and Islam—yet authoritative over them—is . . . quite unwarranted . . . It is surely the case that Jews, Christians, and Muslims have more in common than most of their adherents recognize, and one important item they have in common is a tendency to reflect on the figure of Abraham as he appears in their respective collections of authoritative literature. But those collections differ, the Abraham who appears in each of them is distinctive in important ways, and, although interreligious concord is devoutly to be desired, the patriarch is less useful to that end than many think.

Levenson’s concluding chapter (an earlier version of which appeared three years ago in these pages) is entitled “One Abraham or Three?” but by this point it is clear that while the question is important it is also largely rhetorical.

Abraham begins, of course, first as “Abram,” a Mesopotamian peasant summoned by an as-yet-unknown god to respond to a mysterious command to leave his familiar surroundings for a land and destiny that the god slowly discloses. Within Genesis itself, this first Abram is amplified; he becomes “Abraham” (“the ancestor of many peoples”). He also becomes, through his circumcision, the archetypal covenant-partner of the God of Abraham. His entire life is presented by the biblical text as foreshadowing the history of his descendants, through his sons, and theirs.

The implications of covenantal existence are written not only in the patriarch’s flesh, but also in the string of extravagant divine promises that, despite Abraham’s not-unreasonable doubts, actually materialize. In the centuries during which the canonical shaping of the Hebrew scriptures took place, the biblical figure of Abraham grew both within and beyond the writings that would come to be included in the Hebrew Bible.

In some circles of late-Second Temple Judaism (that is from roughly the 3rd century B.C.E through the 1st century C.E.), reflections on biblical clues generated the image of Abraham as an iconoclastic missionary of the one God to the nations of the world. This Abraham, who can scarcely be found in the verses of Genesis, is a fierce preacher against idolatrous worship, a willing martyr in service of his God, a saver of souls threatened by false theological ideas, and, in a daring midrashic outburst, a creator of new Jewish souls through his missionary activities. (“Abraham would convert the men and Sarah would convert the women.”) Sometime later, in rabbinic readings, Abraham takes on a new persona as the faithful observer of the as-yet-unrevealed dual Torah, observing the commandments—whether all 613 of them or only the seven delivered to Noah was a subject of debate—centuries prior to the revelation of the Torah to his descendants at Sinai.

Almost simultaneously with the rise of the rabbinic Abraham-as-Torah-hero, and likely even prior to the richest rabbinic contributions to the image of Father Abraham, Abraham emerges in another guise, as the spiritual forefather of Jewish and Gentile messianists. Paul, in particular, finds in Abraham’s repeatedly tested trust in the covenant the very archetype of Christian faith in the salvation of the uncircumcised afforded by the atoning death of Jesus.

The polemic between early Christianity and rabbinic Judaism over Abraham was, of course, especially fraught, much of it centered on the interpretation of Abraham’s almost-sacrifice of Isaac in Genesis 22. In the case of rabbinic Judaism, the story is a paradigm of faith and religious martyrdom, and its spare narrative reverberates throughout the liturgy. In the case of Christianity, of course, it “served as a key resource by which the early church developed its understanding of the role of Jesus, and especially his death, in the history of salvation.” Levenson, who has treated these matters in great depth in his book of some years ago, The Death and Resurrection of the Beloved Son: The Transformation of Child Sacrifice in Christianity and Judaism, here gives us a fascinating close reading of the biblical text and its subsequent interpretations in what is the longest and most intricate chapter of the book. The final stage in the history of the classic Abraham tradition is, of course, embodied in the Abrahamic materials of the Qur’an and its associated exegetical-traditions in the first three Islamic centuries. The Abraham (Ibrahim) emerging from this turn of tradition is eminently recognizable from the preceding traditions—except that now he is, as Levenson shows, a kind of proto-Muhammad—literally, “the first to confess Islam,” who models the shape of future Islamic practice and spirituality as founder of the first Mosque (the Meccan Kaaba) and emblem of pure monotheism and utterly selfless submission to God.

The polychromatic image of Abraham that emerges from Levenson’s patient, subtle tracing of this textual history is fascinating. What it certainly does not yield is a “usable Abraham.” That is, if by “usable Abraham” one has in mind a figure who can serve as a fixed focus of common devotion or solidarity among the members of what are increasingly—especially in “ecumenical” circles—identified as the “Abrahamic faiths.” Neither the Jewish, Christian, or Islamic faithful, nor their great teachers, devoted their labors to creating an “Abraham for everyone.”  Rather, they constructed an Abraham for us, a patriarch who served as the unique model of an exclusionary revelation to an exclusive community of faith, practice, and ritual.

Levenson’s study of Abraham, in sum, will disappoint those committed to an over hasty ecumenism, eager to paper-over the simple fact that it is precisely what the “Abrahamic traditions” hold in common—from the matter of genealogical ancestry to the Unity of the Divine Name—that has placed them in sometimes deadly competition. In fact, Levenson’s entire project appears designed to disappoint and disable the uncritical ecumenism so current among well-meaning believers in interfaith understanding. He even goes so far as to single out his own Harvard University’s Global Negotiation Project as a fundamental target of his polemic. (The contemporary Catholic theologian Karl-Josef Kuschel is another such target.) Nevertheless, Professor Levenson does not condemn his readers to a stark choice between facile theological ecumenism and fatalistic despair about respectful coexistence among the “children of Abraham.” Rather, his study encourages us to look unflinchingly at the limits of difference and commonality within and across religious traditions.

Levenson’s learned book (the first in Princeton’s new Library of Jewish Ideas Series) comes at a singular moment in the history of the academic study of religion. Over roughly the past forty years, the field of religious studies as a whole has become achingly aware of its historical role, from the late 19th century into the mid-20th, as a provider of intellectual ammunition for projects that amounted to theological special pleading and triumphalism on behalf of Christianity’s polemic with Judaism, in particular, or on behalf of the “Judeo-Christian tradition” at the expense of Islam, in general. In contrast, while Levenson undoubtedly and unapologetically puts a Judaic “spin” on the images of the patriarch common to each tradition, he is meticulous in giving each tradition an opportunity to, in effect, comment upon his constructive analysis. Levenson expresses himself on this point most elegantly:

Any argument that the Abraham of one of these religions is the real Abraham will necessarily be fatally circular and privilege the scriptures and traditions of the very religion it seeks to validate. Thus, our concentration on the Jewish Abraham in this book implies no claim that the rival Abrahams of Christianity and Islam lack a parallel integrity of their own. On the contrary, the distinctive character of Abraham in Judaism—and to a large degree the distinctive character of Judaism itself—can be best understood through an honest and nonapologetic comparison and contrast with Abraham as he appears in the other two traditions now conventionally termed Abrahamic.

If there is an ecumenical payoff in comparative studies such as Levenson’s, it lies precisely where he says it does: not in the “discovery” of superficial points of commonality, but in the recovery of irreconcilable commitments that challenge each community to see itself from the vantage point of the others. The figure of “Father Abraham,” as he emerges from the theological imagination of Judaism, Christianity, and Islam, is certainly a good place to begin. 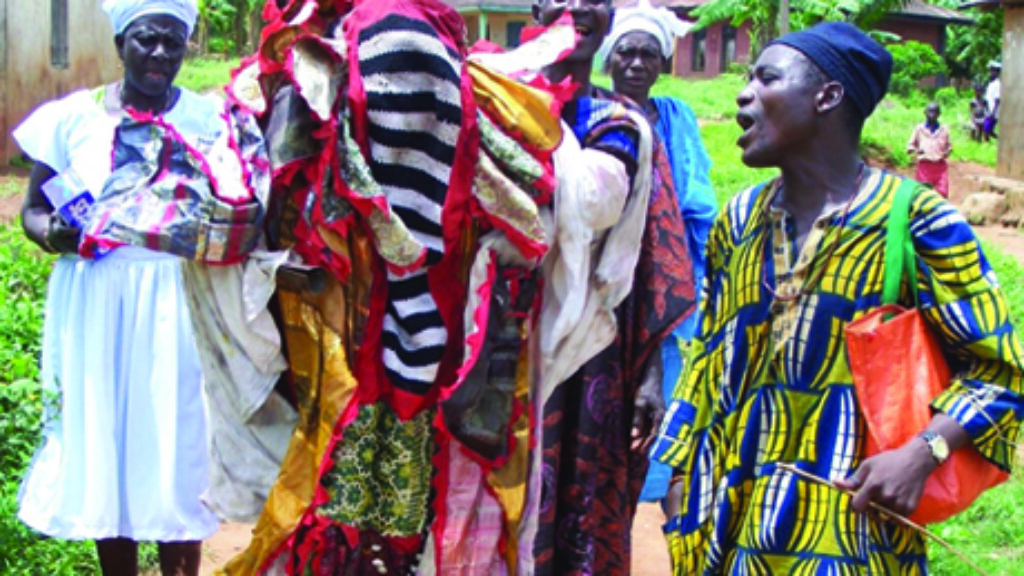 The One and the Many

A popular new book deals with differences between the world's religions, but misses the mark in several of them.

A newly published collection of letters shows a new, softer side of Rosa Luxemburg.

Kafka continues to interest everyone from academics to Hasidic slam poets.